In 1992, I noticed that there wasn't a single Western computer game, even though Western movies had been popular off and on for years. But I wanted to make a humorous Western. What sort of Western could be funny? While discussing this with Roberta Williams, I started to say "farmer" but my mouth tried to say "rancher"and out came a tangled mess that kind of sounded like, "farmer-cist." Hey! A pharmacist? Why not? Thus was born Freddy Pharkas, Frontier Pharmacist! 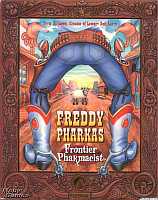 I think it may well be my funniest game, due in great part to the wit of Josh Mandel. Computer Gaming World called it "The Blazing Saddles of computer games" (see box cover below) which I considered perfect praise since that movie was my inspiration.

And I've included MIDI files of much of the music written especially for Freddy Pharkas, Frontier Pharmacist by Aubrey Hodges. And here's the "Score!" sound effect you heard every time you scored a point. 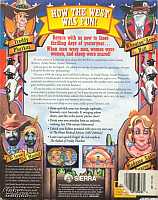 Stuck? Theres Walkthrougs, Points lists and much more. If you're having trouble getting the game running under modern Windows versions, there's some Troubleshooting help too, you can find it all in the menu!

"Missing" the original manual that came with the game, The Modern Day Book of Health and Hygiene? You've got to have it or you'll never be able to concoct your pharmacutical products. Take your choice: here it is in fast-to-download and easy-to-search text format. Or, here's a better looking version, in Adobe Acrobat format. 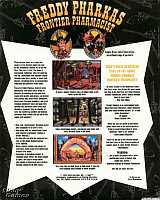 Here are a pair of advertisements that Sierra ran for Freddy: The Good, The Bad, and the Butt Ugly plus Good Clean Fun -- Naaaaaaat!

Be sure to also visit Andrew Zitnay's absolutely all-inclusive web site, www.FreddyPharkas.com. I think it's the web's single best source of information about the game, including where to find it today.

How many games get reviews after nearly 20 years? Here's one by Kurt Kalata on Hard Core Gaming. And another on Adventure Gamers by Troy Hoshor.