On April 18th, 2002, I went to San Francisco to appear on the TechTV network's daily computer show called "The Screen Savers!" with hosts Leo LaPorte and Patrick Norton (pictured above, on either side of Martin Sargent). It was a great show while it lasted. Everyone in the cast had a great sense of humor, was extremely knowledgeable about computers, the Net, and tech in general, and shared it in a easy, relaxed manner that made it the most entertaining computer show ever. 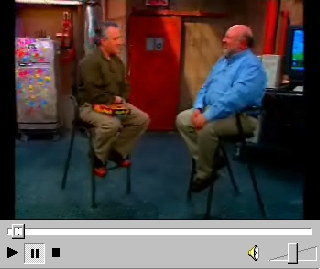 I think it may be the best interview I've ever given. Click here to see it now. Several things contributed to that:

Leo totally ignored the list, the teleprompter, and the order of questions and just let the conversation flow, the hallmark of a good interviewer. In fact, the funniest part of the entire interview was not visible to viewers: watching the teleprompter operator scroll up and down through the list of questions, obviously thinking, "Now where in the hell are they?!"

In short, I had a great time and even got to plug this site, CyberJoke 3000™, and my perennially forthcoming humor book.

Postscript: Unfortunately, when TechTV was sold, the show went downhill with it and was soon cancelled. All the incredibly talented principals have gone on to bigger and better things. Check out Leo Laporte at Leoville.com and This Week in Tech, Patrick Norton and Robert Heron at DL.tv, and Kevin Rose at Digg.com.