While I didn't write this, it's the best bio of me I've seen.

It dates from the summer of 1998, when Larry's Casino was released. Since then, I've retired completely from game designing to become a fulltime website maintainer (i.e., this site) and eJoke provider to the masses (i.e., CyberJoke 3000™). 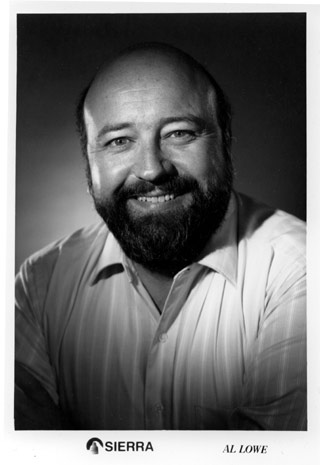 As a kid, Al Lowe was the perennial class clown, often getting into trouble with pranks that didn’t amuse his teachers. Ironically, he later became a high school music teacher, working in that field for 15 years. Today, as computer gaming’s most successful humorists, he’s come full circle. Quips Lowe, "Now I get paid to do all the same stuff that used to get me in trouble!"

Lowe joined Sierra in 1982, and since that time has brought to life a wacky, award-winning cast of characters. His first 3-D animated graphic adventure game was a spin-off from the 1985 Disney film, The Black Cauldron. Other early products included Donald Duck’s Playground and Winnie the Pooh in the 100-Acre Woods, all of which were produced after Sierra acquired the rights to several Disney characters in the early 1980s.

During his early years at Sierra, Lowe oversaw multiple elements of game development, from design to music to graphics. In 1986, he was lead programmer on both Roberta Williams’ King’s Quest III and the original Police Quest. Over the years, Lowe’s special brand of magic has touched over two dozen Sierra titles in one way or another.

But Lowe is best known as creator of the popular Leisure Suit Larry series, which spawned a new computer gaming genre of "adult" titles. It also spawned a lot of controversy. In fact, the California legislature once introduced a "Leisure Suit Larry" bill, to prohibit adult themes in any computer game. Fortunately, the legislation died in committee, thanks to the diligence of the software industry.

With its outrageous humor and fantastic graphics, Leisure Suit Larry In the Land of the Lounge Lizards won the coveted Software Publishers Award for best adventure game of 1987. Since then Lowe has created five additional adventures for Larry, and has been featured in such widespread media as Entertainment Tonight, Rolling Stone, The New York Times, and Playboy.

In 1992, Lowe created another hit character in Freddy Pharkas, Frontier Pharmacist. Set in post-Gold Rush California, you play Freddy, a beloved but meek pharmacist who must resume his gunslinging ways in order to save his newly-adopted home town.

Not content with just creating characters, for 1995’s Torin’s Passage Lowe invented a whole world. And not just one world, but five worlds nested together, one inside the other. In Torin’s Passage, Lowe tackled the challenge of creating a game that would be fun for a parent to play with a child. With its delightful humor, imaginative plot, gorgeous backgrounds and sophisticated animation, Torin’s Passage works well on many levels.

Leisure Suit Larry 7: Love for Sail! was released in 1996 and has sold over 300,000 copies. It finds the Polyester Prince on a cruise ship skippered by Captain Thygh, an oversexed fun-loving female, who sponsors a weekly contest for her male guests. She calls it "The Thygh's Man Trophy." Larry wants to win just as soon as he learns the prize: the winner gets to spend the following week "cruising on the Captain!"

In 1998, Lowe released Leisure Suit Larry Casino, the first casino simulator with a sense of humor. It contains literally thousands of lines of typical Larry humor for single play. But it's real strength comes when you connect to the Internet and play and chat with other real people.

Lowe and his family moved to the Seattle area in 1994. An accomplished jazz artist, he continues to play various saxophones in various Seattle jazz bands.

Since I left Sierra On-Line in 1998, I have truly enjoyed retirement, learning to play golf, corresponding with the many fans who have found me via this web site, playing jazz, traveling, spending time with family and friends, catching up on my reading and film watching, working on my N-scale model railroad NTRAK modules, and doing volunteer work for local charities.

I'd love to hear from you and add you to my fan letters page...if I somehow made you laugh, but especially if my games were important to you in some way, or influenced your career or life--especially if you wound up in jail!

Click on the Send Email link under "More" on the menu bar above.