Torin's Passage is a game I wrote in 1994 after watching the film Mrs. Doubtfire with my daughter. I realized during that film that the audience was laughing in two different pitches: high little giggles when the kids laughed at the slapstick parts of the film, and deep knowing guffaws when the adults caught something that they knew the kids wouldn't get. I thought: Why isn't there a computer game that my 9-year-old daughter and I could play that works like that?

So I created one. 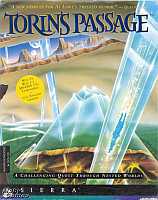 That's Torin on the left, with his sidekick, Boogle. The game is filled with creative characters by James G. Murphy, who left Sierra for a little company called Pixar, where he is now a lead animator. I bet he gets some great Disney World deals out of that, or at least a deal on fine Orlando Florida hotels. Dreep, above right, is still one of my favorite characters. Just look below at all the wonderful characters Jim, and animator Al Eufrasio, created.

We were extremely fortunate to convince 3-time Academy Award winner, Michel LeGrand to compose an original score for the game. Needless to say, the music was fantastic! And now, thanks to Knut Strand, you can download the music.

Mark Seibert, Torin's producer and my good friend, has a Walk Through of the game on his web site. While you're there, poke around through his other Sierra memorabilia. Here's the Torin's Passage promo video, our equivalent of a movie trailer.

If you need help getting Torin's Passage to operate properly, visit the Torin's Troubleshooting page. Check out more of the game's graphics. See what the Russian version looked like. And finally, I have a few helpful cheats and Easter eggs for you. And the story of the nested worlds of Statra. 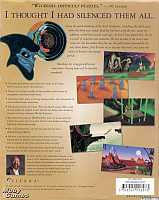 And if you'd like to have someone else play the game for you, you can watch this Playthrough by Alek Sharma on YouTube. It takes a while to get through the 20 videos, but you'll get to see (and hear) the entire game.

Torin's Passage takes place on Strata, a planet that consists of five worlds, one within the other, like Russian nesting dolls. During the course of the game, Torin passes from one world to the next.