Why is Al Lowe in all his own games?

Honestly, it wasn't my idea! 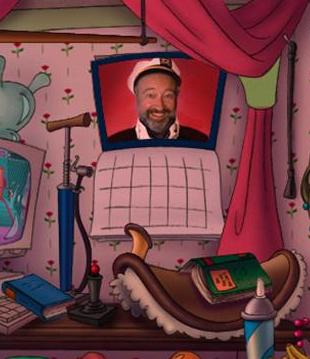 When artists have to create so many characters, it's rough to be entirely original, so they look at real people for inspiration. I was an easy mark, for the same reason that I loved putting Ken Williams (Sierra's founder and CEO during its successful period) in the games--we knew we wouldn't get sued!

But when Art Director Bil Skirvin put me up-front and clearly recognizible in Leisure Suit Larry 6: Shape Up or Slip Out!, I got the last laugh on him! You see, I have a friend named Art who looks so much like me that we're often mistaken for brothers.

So, rather than giving myself a "starring role" in Larry6, I just named that character Art, in honor of my friend--and pulling one on the artists' little joke!