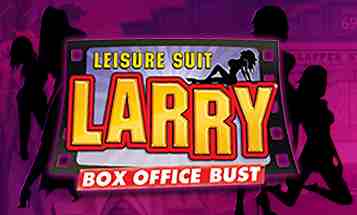 All I know about BOB is what I've read online. VU (and later Activision, Team 17 and Codemasters) did not consult me nor discuss anything about this game with me. In fact, they've expressed no interest in me whatsoever! For a while, I hoped that they would remember to send me a review copy. Now that the reviews are in, it's just as well that they didn't!

In case you missed the news, Sierra announced another Larry Lovage game (although this time they spelled his name with an extra "E" i.e., "Loveage" ): Leisure Suit Larry: Box Office Bust. A few months later, after Activision merged with VU, they cancelled it, along with many other VU titles. In early 2009, the game's developer Team 17 announced that Codemasters had picked up the title. It was released at the end of March. No advance copies were released to reviewers (always an ominous sign). 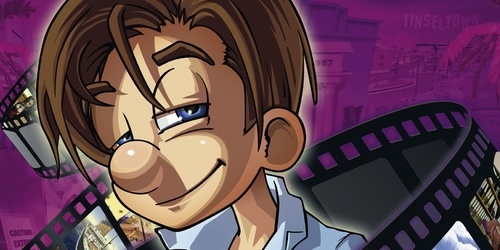 Originally, the game's Executive Producer, John Melchior, claimed it had "open world sand box gameplay," racing, platforming, and puzzles and yet also repeated four times that "it's an adventure game." As another warning sign that rarely bodes well for good gameplay, Larry BOB proudly features its voiceover talent, which includes some D-list "stars." Mr. Melchior wanted to make a game that "Al Lowe would like to play." I wonder why he didn't just ask me?

Now that the reviews are in, the answer is: Yes, it can!

Here are some quotes from the current reviews:

GameRankings scores hundreds of games, giving each a percentage rating based on cumulative reviews. BOB is currently in next to last place among all games, with a score of 16%.

Thunderbolt gave the game 1 out of 10 but only because the reviewer's editors wouldn't let him give it a 0! "How a formerly respected developer like Team 17 came up with this rubbish is a mystery indeed..." "Technically you’ll have a hard time finding a worse game." "In short, BOB has no redeeming qualities at all and I would not wish this on my worst enemy."

GameSpot gave it a 2.5 rating of "Terrible." "some of the foulest dialogue you'll hear in a game. But most of it is far from entertaining, let alone funny." "a cesspool of foul language and ugly personalities" "terrible gameplay is stretched thin over hours and hours of redundant, repetitive quests" "a bad purchase even at its discount price"

JustAdventure gave it an F. "the worst game of the decade" "a major embarrassment for all concerned" "If it looks like a turd and if it smells like a turd..." "unhindered by any resemblance of humor" "why in the hell are the women so butt-ugly and misshapen?" "a game that is so bad that it actually smells like day old dog-shit that has been ripening under the hot sun." "This game tries to be everything – fighting, shooting, driving, horseback riding, seduction – but does absolutely nothing right."

EuroGamer gave it 2 of 10. "you will want to use heavy machinery to crush everyone involved in its creation, from the person responsible for drawing Larry's hateful face to the person who put the staples in the manuals." "It's impossible to understand why Codemasters plucked this from the rubble of the Vivendi-Activision merger, like a shellshocked Blitz victim retrieving the dead cat instead of the family jewels." "hateful, toss, stupid, tedious, terrible, dreadful, pathetic. That about sums it up, but just to be clear: do not buy this game. You will not only want your money back, you will want reimbursement for the electricity consumed by your Xbox 360 in the six minutes it took to realise you had made a horrible mistake."

TeamXbox gave it 4/10. "If this version of Leisure Suit was a bit more polished on the technical side, it probably wouldn’t have been that bad. But add the tech anomalies in with the generic gameplay and lack of strong, sexual zest and you’d be better off getting your jollies from a National Geographic."

CheatCodeCentral gave it 1/5 rating of "avoid." "gameplay that will usually leave you more frustrated than a Saturday night alone" "environments are rather bland and stale" "lackluster gameplay" "the story and jokes fall flatter than Rob Schneider’s career" "the jokes could have been funnier if the actors at least seemed like they cared enough about them to tell them right" "looking at the character models, thank God there’s no nudity in the game." "Box Office Bust should never be played, it should be used as a paperweight."

Teletext gave it 1/10. "One of the worst video games ever made - brutally unfunny and monotonously inept on every level." "It's relatively cheap, but not nearly enough for this to seem anything other than daylight robbery." "All of the female characters are grotesquely ugly, so even if the game was well-written it still wouldn't be in the least bit titillating." "Offensively unamusing. Dull, repetitive missions made worse by terrible platforming and combat."

IGN gave it a 2.2 rating of "Terrible." "Apparently the only real joke in Box Office Bust is on the player." "Lots of dialogue, very few laughs. It's a generally witless kind of humor. The camera does its best to ruin everything." "The animations are strange and the character models stranger. Reams of sight gags, nothing memorable." "a bunch of different gameplay styles implemented with the finesse of a blind giraffe" "sloppy third-person platforming, tedious stealth sequences," "horrible camera and control systems" "uncomfortably unfunny dialogue spewed from the lips of entirely unlikable characters."

ZTGameDomain gave it a 42/100. Yet it concludes: "Not only does it take away from what the original games did so well, it fails to execute even the simplest of gameplay necessities. The platform jumping is horrendous, the combat mechanics are atrocious and sitting through some of the dialogue is just plain painful. I was really looking forward to taking Larry for another journey down an adult road, but most of the comedy here is just plain infantile and not very funny. While there is certainly nothing else like it, there is very little reason to recommend Box Office Bust to anyone. There is a reason the game released at $19.99."

The Arizona Daily Star "The clear frontrunner for worst game of the year has emerged, thanks to this mess, an equally pathetic attempt at smut and humor." "The graphics are ugly, the jokes turn your stomach and there's not a moment you play and don't feel you're wasting your time with trash. The voice cast includes Shannon Elizabeth, Jay Mohr, Patrick Warburton and Carmen Electra, which seems about right, given the game's quality."

TechZine says "Oh, Larry! What have they done to you! I'm really searching for something positive to say, but I can't find anything, no matter how hard I try. Trashing out a new game is one thing, but literally destroying a twenty year old franchise brings a whole new meaning of the word bad."

411mania gave it a "Very Bad" rating of 2.4/10. "a wide variety of quests, all seemingly made by a first year programmer…who’s blind…and never played a video game in his life." "The character models are what deter the graphics from being passable. They look like some sort of creature created by a demonic-child who has been forced to watch low-budget horror movies about the occult then hours of Care Bears before being told to draw a bunch of horny, unfunny people who most likely carry an odor." "I used to think Seth Rogen films had a lot of cursing but this is ri-god-damn-diculous." "In short, this game is garbage." "Some of the worst platforming, shooting, fighting, and stealth missions in the history of gaming."

CNET gave it a "Terrible" rating. "terrible gameplay is stretched thin over hours and hours of redundant, repetitive quests" "by relentlessly degrading men and women alike it transcends mere misogyny and insults us all equally and without prejudice." "the women in the game are downright ugly, even by cartoon sexy-lady standards." "Poor technical performance joins mindless, repetitive gameplay and a truly atrocious sense of humor"

Thank you, VU Games, for keeping me completely away from this latest disaster!